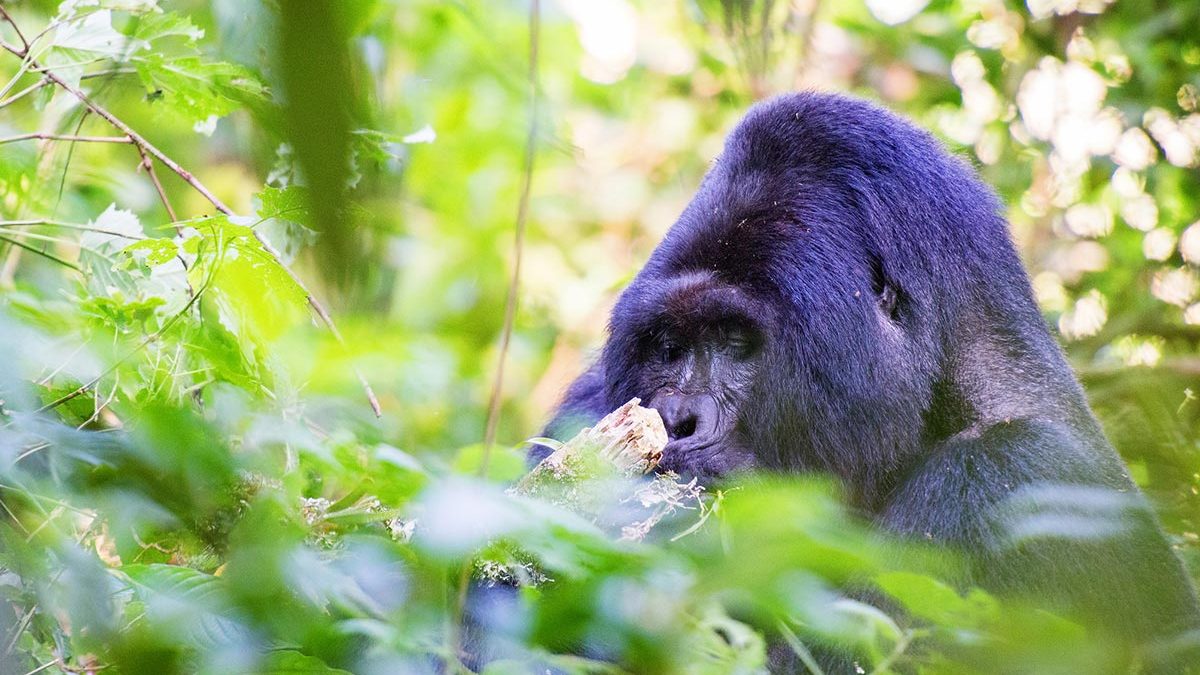 Uganda apparently has 18 Habituated Mountain Gorilla families which can be visited by tourists on a daily gorilla trekking excursion. About three other gorilla groups are semi habituated and are available for the daily four-hour gorilla habituation experience and about three in Mgahinga are being habituated and reserved for primatologists research.

Bikyingi, Kutu, and Mucunguzi in Rushaga are Families under Habituation at the moment and not yet ready for trekking however can be visited by tourists interested in the Gorilla Habituation Experience.

Before you start your Gorilla Trekking Adventure, we need you to be fore-equipped with information about the gorilla families as definitely you will end up with one of these families. Please note that due to the dynamics of the wild and forces of nature, the information and details provided here may change any time without notice much as we keep updating it from time to time so that you can have fast hand details.

Habituated by 1999, the group was first sighted near a swamp in Bwindi Impenetrable forest thus its name Habinyanga is from a Rukiga word “Nyanja” which means a water body.  Habinyanja Family in 2002 due to succession battles broke up giving birth to Rushegura Family and the two sometimes meet and have peaceful reunions.

Habituated by 1993, this is the Oldest Uganda’s gorilla family. The group was first sighted near Mubare Hill deep in Bwindi forest by the trackers hence its name “Mubare”, (the group is also sometimes called Maraya) this is when a gorilla was first seen in Uganda. The group started with 18 Members but due to life loss and moving to other groups, today the group has only 10 individuals.

This group broke away from Habinyanja in 2002 at a place known as Rushegura hence its name; Mwirima who inspired the breakaway from Habinyanja dominated the family. This is a calm group and the most adventurous, it used to cross to the neighbouring DR. Congo, the family is usually seen in the communities in Buhoma and sometimes at gorilla forest Camp.

Located in the northern sector of Bwindi impenetrable forest national park, Buhoma, Katwe Group took up to three years of habituation and was officially opened up for tourism in August 2018. This group was first sighted at the top of a hill hence the name “Katwe“. This is one of the recently habituated gorilla families,  Katwe family increased the number of habituated gorilla families in the Buhoma sector of Bwindi to 4, each can be visited by 8 tourists daily meaning a total of 32 gorilla trekking permits are now available daily in Buhoma. Some members of the Katwe family keep moving out and back in the group, and the family apparently has 10 individuals including 1 Silverback who leads the family.

Still, in the Buhoma sector there is yet another gorilla family, Binyindo the dominant silverback to this group has a cut on the Nose hence the name of the group `Binyindo`, which means bad nose. The group has 12 members with 1 silverback; it is not yet fully opened up to visitors. This is so far the newest group as of April 2019.

Habituated by 2008 the gorilla family adopted its name from Bitukura River in the Ruhijja sector of Bwindi Impenetrable Forest National Park. The group has a close relationship with the Kyaguriro family and they usually meet, it took a short time of habituation only 15 months due to the frequent encounters of the family members with UWA rangers which made habituation easier.

Mukiza is the name of the leading silverback to this gorilla family; this group faced a breakaway due to dominancy battles, Silver Kyaguriro managed to convince the other seven members and they left forming their own group. The family has 13 members including 1 silverback.

This group broke away from Mukiza. Initially, the group was called Kyaguriro Rukara immediately after the breakaway, this gorilla group is used for both tourism and research purposes. This helps the conservationists to study more about the behaviour and lifestyle of Mountain Gorillas.

Oruzogo family was the second habituated gorilla group in the Ruhijja sector of Bwindi Impenetrable Forest National Park,   this family was opened up for visits in 2011 with 23 members. Today the family has 17 individuals with 3 Silverbacks

The Kahungye gorilla family in the Rushaga sector of Bwindi National Park was opened for tourism activities in 2011 with 27 individuals and 3 silverbacks however in less than a year the group split up forming another family Busingye Gorilla Family. The Kahungye family has further suffered another breakaway with Rwigi leaving the Family, now consisting of 16 individuals including 2 silverbacks.

Rwigi apparently the new gorilla family in Bwindi Impenetrable Forest as of April 2019, Rwigi a silverback that belonged to the Kahungye family broke away with some females and formed his own family, the family was officially opened up for visit by tourists in April 2019. It comprises 6 individuals including RWigi the silverback.

Silverback Busingye broke away from the Kahungye family in June 2012 forming his own family the Busingye family. The word Busingye is a local Rukiga word meaning ‘peace’. However, the silverback Busingye is known for fighting with other silverbacks and he would always grab females to add to his family whenever he could clash with other families especially the non-habituated ones, he is ambitious and always wanting to show off his power when he faces others.

The Nshongi gorilla family was the largest group ever habituated, the process completed by 2009 with 36 individuals. The family was first spotted near the river Nsongi after which the group was named, the word Nshongi refers to the deep colour of the waters of the river. Due to the large size of the group a year later in 2010 Mishaya, one of the Silverbacks broke away with 10 other members and formed the Mishaya Family.  Nshongi group was left with 26 individuals and the breakaway has continued to date when the group is comprised of 7 individuals including 1 silverback.

Mishaya broke away Nshongi group in 2010 and formed their own family. Their leader Mishaya was a known fighter and he often faced off with other gorilla families from whom he could always influence females to follow him and he expanded the family. However, today the group has only 8 individuals including one silverback and one black back.

Originally, the Nshongi family was the largest gorilla group ever habituated. However, in July 2010 Silverback Mishaya decided to start his own family. Two years later also Bweza, another silverback preferred to separate himself from the rest of the group. Initially, the UWA rangers suspected that they would get back together again, but when it appeared that the split was infinitive, this ‘new’ group opened for tourism in December 2012.

Mucunguzi is a group still under habituation ad can be visited by tourists partaking in the Gorilla Habituation Experience.

Bikingi is a group still under habituation ad can be visited by tourists partaking in the Gorilla Habituation Experience.

Kutu is a group still under habituation ad can be visited by tourists partaking in the Gorilla Habituation Experience.

Nkuringo gorilla family was completely habituated in 2004. Nkuringo family was first found around a hill hence its name as the word Nkuringo is a Rukiga word that means “a round hill”. The individuals of this group were often found feeding on crops including bananas and sweet potatoes in the communities and near people’s homes, this caused conflicts with the local communities, the habituation. Habituating this gorilla family and opening it up for tourists was a measure of directly benefiting the local communities at the same time conserving the gorillas.

Bushaho is the name of the place where this group was first sighted, the Bushaho gorilla family is fully habituated and open to tourism activities and comprises of 9 individuals including 1 silverback.

This group broke away from the Nkuringo family, the leading silverback Christmas was born on Christmas day. Together with the other 5 members, Christmas decided to move on and start their own family. The group is open to tourism activities since 2018, together with Bushaho increased the number of gorilla families in the Nkuringo sector to 3.

Mgahinga National Park only has one gorilla family the Nyakagezi family! The family has 10 individuals including 3 silverbacks, the dominant silverback likes travelling and kept on crossing borders between Uganda, Rwanda and the Democratic Republic of Congo. Recently the group firmed its citizenship in Uganda as they have been stable in Mgahinga National Park since 2012.

When you’re planning a gorilla trekking safari in Uganda, the local logistics of acquiring a gorilla permit, booking the right transportation and accommodation can be daunting to the foreigner especially if you’re located on a different continent. You need a knowledgeable local safari operator to act on your behalf and take care of all the local bureaucracies so you can concentrate on the experience. It is our local expertise at Valiant Safaris to take care of all of your Uganda gorilla safari needs. Send us an email at info@valiantsafaris.com and we make sure you find planning a custom safari easy and the experience exciting and awe-inspiring.